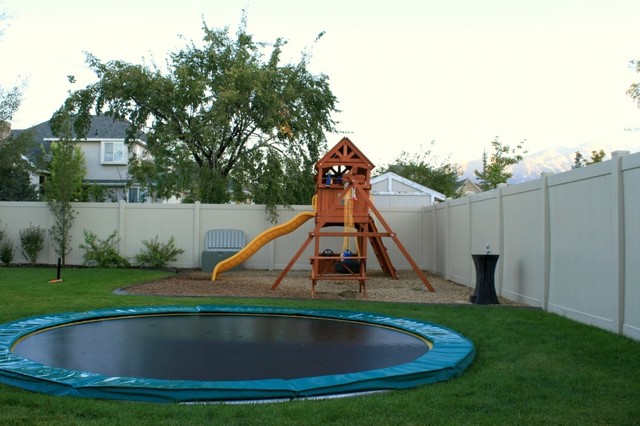 Trampolines are one of these things that every child should have to enjoy and play with. They’re not just a fantastic toy offering hours of entertainment, but also a great tool for staying in shape. However, a lot of people choose not to invest ﻿﻿in a trampoline for their family home because they take up too much space, as they sit on top of the ground. There’s also the worry of a child being thrown mid-bounce onto the floor, ending up with a broken bone and a trip to the hospital.

The good news is that over-ground trampolines aren’t the only option; there are also in-ground designs to choose from. These don’t take up too much space in your garden because a cover can be placed over them. Plus, they’re safer. Trampolines are a great outdoor toy for kids because they encourage active play. They also ensure that children are getting all the exercise that they need and help to build muscle strength. The great thing about them also being, that they’re not just suitable for kids, adults can use them too.

If the idea of an in-ground trampoline appeals to you, here’s everything that you need to know.

What is an in-ground trampoline?

You can use a normal trampoline to create an in-ground one, or you can opt for a specialist design that’s been made for in-ground use. These designs are made to be stronger, and some have walls instead of the traditional ‘legs’ that most trampolines have. These, sadly, can be a lot pricier. This is why a lot of people prefer to go down the DIY route when creating an in-ground trampoline for their homes. When it comes to creating a DIY in-ground design, it’s essential that the hole is supported with wood, cement or some other form of support. Else, over time, it could erode and eventually, cave in. 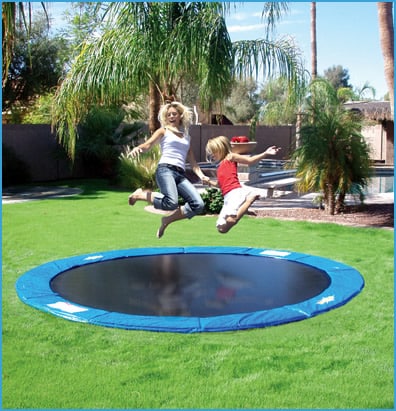 For parents, the number one concern when it comes to trampolines is, of course, safety. No one wants to see their children get hurt. That's why it’s so important that when buying a trampoline, you opt for the safest option.

In-ground trampolines can be safer, but they’re not always. You see, if there’s no safety net, there’s still a risk that your child may fall and hurt themselves. However, because the height of the trampoline is at ground level, this is less likely. With above ground trampolines, sometimes kids climb underneath the bounce mat when it’s in use and get hurt that way. With an in-ground design, there’s no risk of this as the underneath of the bounce mat is hidden in a hole and is inaccessible.

That being said, there are other risks that come with having an in-ground trampoline. The hole around the trampoline has to be wider than the circumference of the bounce mat so that there is a source of ventilation. This gap is big enough for little hands and feet to get stuck down, which could cause a nasty injury. However, there is, of course, the option of netting around this area, to prevent this.

How expensive are in-ground trampolines?

The planning and digging stages of installation are the most time-consuming. But once these are completed, it’s fairly easy from there. Digging can take hours or even days if you’re doing it by hand, which is why a lot of people opt to hire a digger. This makes the process easier but adds more money to the cost.

Once the hole has been created, the rest of assembling your in-ground trampoline is easy. All you have to do is place it in the hole, add some of the dirt back in to give extra support, and that’s it. Ensure that the hole is large enough to add a retaining wall, to prevent it from collapsing. Some trampolines come with a built-in retaining wall, if not, you’ll need to create your own.

To start with, there’s the fact that they are easier to maintain and tend to last for longer. Because they’re not exposed to the elements, in-ground designs tend to wear better and need less maintenance. They are less likely to develop rust, as they're protected from the rain. They also won't damage the grass like normal trampolines, or need moving about each week.

That being said, just like all trampolines, some regular care is required. Once a year the bounce mat should be checked. Over time, the sun, wind, and rain can damage your bounce mat, making it more prone to breaking. You can make this less likely by opting for a design that’s got UV protection. Even though rust is less likely, the frame should be checked regularly. Just in case any damage has occurred. If you don’t check it, the frame could end up collapsing. If this happens, it could cause some nasty injuries.

Then there’s drainage to think about. Even if you’ve made sure the pit where your trampoline rests has drainage, it still needs checking. Sometimes drainage can become blocked, resulting in a build up of water. This can cause rust to occur on your trampoline, so checking for water is a must. 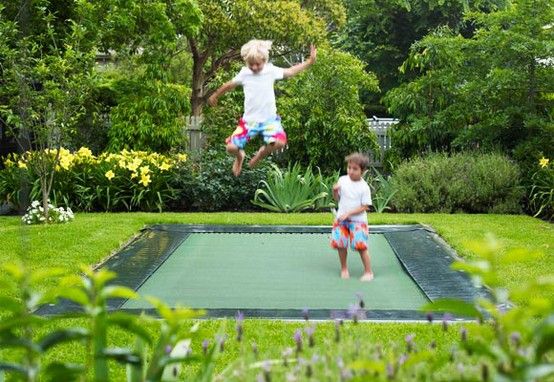 There are two types of in-ground trampoline, which is best for you?

As mentioned above, there are two types of trampolines; ones made to go in the ground and ones that can be adapted. When it comes to choosing which option is best for you, it’s not just about cost; there are various offer factors that should be taken into account.

These are trampolines that have been made to go in the ground, but as mentioned above, they tend to be a lot more expensive. The main benefit of opting for a ready-made in-ground trampoline is that it’s been made to go in the ground. This means it will have built-in retaining walls, a wider spring pad cover, and stronger steel will have been used to make the frame. Most in-ground trampolines also have special ventilation systems built in, to ensure that the air is able to escape. If there isn’t adequate ventilation, the bounce mat will become hard, preventing your children from bouncing as high. If you’re looking for an in-ground trampoline, the New Generation III 15’ In-Ground Trampoline could be ideal.

The great thing about going down the DIY route with your in-ground trampoline is that you’ll save yourself a lot of money. Plus, most above ground trampolines come with safety netting, which can make them even safer. It might not be as strong or have built in ventilation, but compared to a specialist design, it’s much more affordable. Designs like the Skywalker Trampolines 15’ Round W/ Enclosure Spring Pad tend to be popular for DIY in-ground designs. This is because they’re affordable and offer a sturdy design.

So there you have it, everything that you need to know about in-ground trampolines and assembling them. This guide will help you to make an informed decision about what type of trampoline is best for your family. Take the advice above into account, and you can work out which trampoline is best. You may also want to check out trampoline ﻿﻿tent beds for a more exciting playtime.

How to Choose an Indoor Trampoline for Kids

7 Reasons Why Kids Should Play Sports