Paternal Bonding: How to Encourage a Father to Connect With His Children 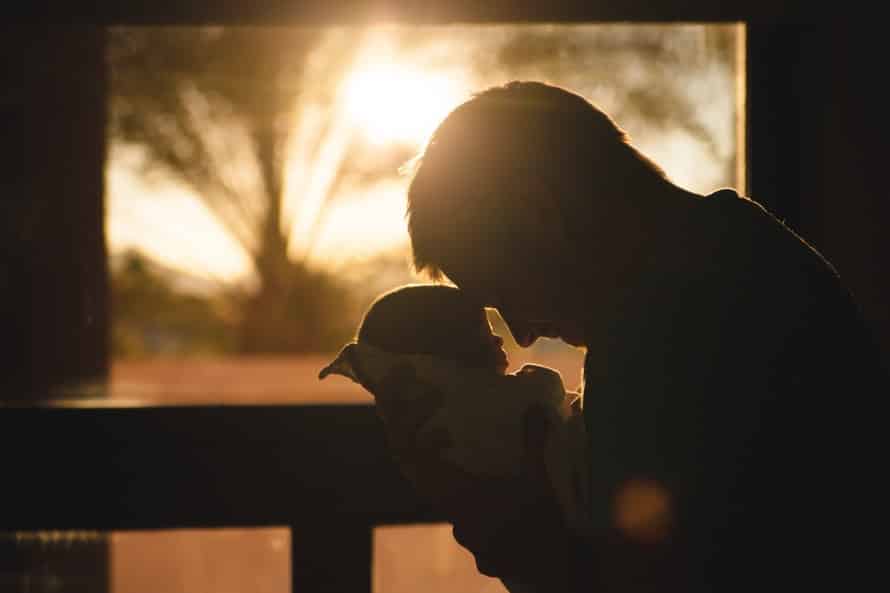 Sometimes mothers get involved in taking care of the baby to the point that the father feels left out of the whole process. This may create a distance between the father and the children. Other times the father is busy working hard for the family, so they miss out on their child’s growth. It means the children end up being comfortable with the mother and not the father. This is wrong because children also need their father. So it is the role of the mother to encourage the father to bond with the child from an early age. In this article are a few tips on how to go about doing this.

Human bonding is actually the result of developing a close, interpersonal relationship with another person. Bonding is a mutual and interactive process. It happens when both parties become attached to each other and is characterized by feelings of affection and trust, to name a few.

Everyone keeps talking about maternal bond, the bond between the mother and her child. It has become the norm of the society that mothers stay at home while fathers make a living. Naturally, mothers spend more time with the child. More time means more bonding time. Fathers, having spent most of the day at work, usually come home feeling stressed and wanting to just rest. More often than not, they spend less time caring for the baby, decreasing their chances of forming a bond with the child. This, however, should not always be the case. As mentioned, there are things that can be done to encourage paternal bonding. Both the mother and the father should agree on their commitment to get involved with their child’s life. It is the role of one another to work on this. 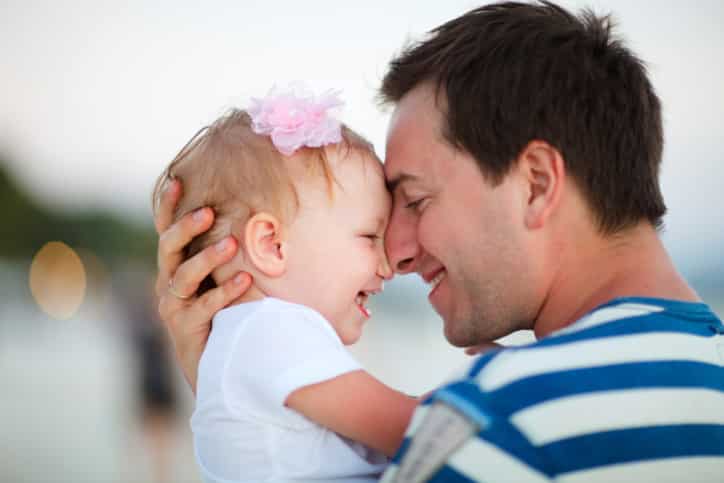 A paternal bond is the relationship that is established between a father and his child. Unlike maternal bonds, a paternal bond has the tendency to vary over the course of a child’s development, speaking in terms of strength and stability. In the US, many children grow up well into adulthood without having any father in their households and have never known any kind of paternal bond at all. It is most usual for paternal bonding to be fully established later in the child’s development when the child has developed his language skills. Fathers tend to be more influential during play interactions with the child. They come in the picture to play with the child after the mother has performed her nurturing duties. Later in the child’s life, the father will be more involved and become the face of discipline while the mother becomes the face of tender support. A child’s views on politics and money will more likely be influenced by the father, while religious views and other general outlooks in life will be influenced by the mother.

A healthy father and child bond is very important and can affect a child well until he has become an adult and a parent himself. Studies suggest that a lack of a good paternal bond and a good father figure can severely affect a child’s life by having negative impacts on the child’s psychology and personality. The benefits of having a good father and child relationship include higher quality of the child’s performance in school. There will also be an increase in his healthy behaviors. Children who have good relationships with their fathers exhibit higher verbal skills, higher cognitive competence, greater empathy, increased curiosity and higher self-esteem.

There are actually different stages through which a father begins bonding his child. A paternal bond may be established during the pregnancy of his partner as the father begins to feel attached to the developing child in the womb. This is also sometimes called womb bonding. Studies suggest that there is some biological basis for womb bonding. According to statistics, during the several few months leading up to the birth of the child, the testosterone levels of the father show a decline. Lowered testosterone levels may decrease aggression and encourage more nurturing behavior from the father, therefore increasing the chances of the father forming a bond with his developing child. It is encouraged for fathers to be present during ultrasound appointments of the mother. Studies have been made to show how ultrasound can play an important role in establishing a paternal bond between the father and his child. According to the studies, a father can imprint on his child during ultrasound, having seen his developing child and hearing his beating heart. During womb bonding, a father is also able to establish a relationship with the baby by talking and singing to the the mother’s belly. Touching the mother’s belly and feeling the baby’s first kicks will even establish the bond further. 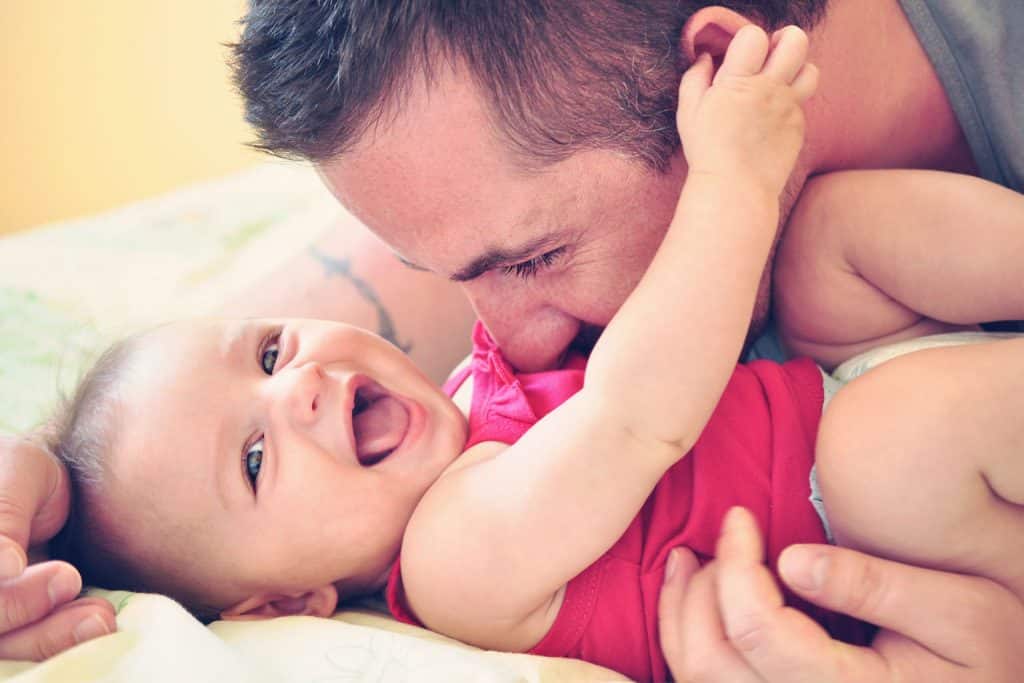 Birth bonding, on the other hand, happens after child birth. It relies greatly on how involved with the whole pregnancy and labor the father is. Some of the greatest tear jerking stories about a father and child relationship involve the day of the child’s birth. When asked about when they knew they were ready to become a father, most fathers would answer the day their child was born and the day their child first grasped their finger with their tiny, tiny hand. A bond is immediately established. Love at first sight holds true when it comes to parents seeing their child for the first time. To bond with the baby, the father simply has to get involved. Fathers are able to form and strengthen their bond with their baby when they participate in soothing and consoling the baby when he needs comforting. Feeding the baby can be a form of bonding as well. Other ways to strengthen the father-child bond is by regularly changing the baby’s diapers, bathing the baby, dressing the baby, and playing or cuddling the baby. Carrying the baby can definitely strengthen the bond since babies are most responsive to touch. Sometimes the paternal bond is established later in the life of the child, when it’s almost time for his first soccer practice or her first piano lesson. Men are built different than women and sometimes, their hormones could get in the way of opening up to relationships. As the better half who is gifted with all the nurturing hormones, moms could help out their partners in connecting with their children. Sometimes, a little push in the right direction should be enough to get fathers get started on bonding with their children.

Things you can do to encourage a father to connect with his children:

During pregnancy, don’t let him feel left out

Involve your partner with the pregnancy by asking him to accompany you to your doctor’s appointments. Make it a point to take him along with you on your ultrasound appointments. Womb bonding is known to be established around this time, when your partner is given palpable representations of your baby. Explore birth options together and ask for his insights. Sit down and talk about the type of parenting style you both would want to reinforce in your household. Decide on your baby’s name together to make him feel more involved. Discuss with him regularly the movements of the baby that you could feel so that he feels part of the pregnancy.

Let him spend time with his child

Starting from when they are toddlers, the father should spend time with them. They don’t always have to be the one to change the diapers; they can carry and cuddle the child, read to them, soothe them and rock them to sleep while talking to them. Talking is very important in establishing a bond. According to studies, babies as young as 30 weeks are able to distinguish their parents’ voices from those of strangers. The voice of the father is even more recognizable than that of the mother given the lower tone, which is easier to be recognized by babies. This will forge a bond between them. A bond is known to be form when two people spend time together. Let them invest their time on your child so that they may develop an attachment to one another. They can be allowed to bottle feed the baby so that the baby will recognize them as a caregiver too.

Involve him in the child’s routine

Many mothers leave the father out of the child’s routine and only let them spend a short time together. This is wrong as it is necessary for the father to be involved in the daily activities surrounding the child’s care. This means that particular aspects of child care should be left entirely to them such as bathing the baby before bedtime, or preparing them for a visit to the pediatrician. Leave them in charge of performing the baby massage. Studies have been made to show that giving your baby a massage helps establish a bond and can even relieve stress from both the baby and the massager. Share the responsibility with them and don’t let them feel as if they are just merely elective participants to the whole parenting scene.

Help him understand the difference between mothering and fathering

Encourage him to touch and caress the baby

Babies respond to touch, so fathers must be encouraged to have skin to skin contact with the baby. This helps the baby to feel the father’s heart beat, and respond to the father’s unique smell. As they do this, the father should be soothing and speak to the child in gentle tones. In time, the child will respond to the sound of the father’s voice and their presence, without the father having to pick them up. Fathers should also learn to lock eyes with the baby as they hold them. They may sing to them or hum as this will help them create a bond with their children.

Other activities like attending visits to the doctor with the child create a bond with the father. Encourage the father to take care of the children when they go through issues such as teething and colds. This will help the father, and the baby grow close.As the child grows and the family becomes able to go out for family walks or grocery shopping together, suggest that your partner carry the baby in a baby sling or carrier. Wearing the baby on his body can be very beneficial for the both of them since skin to skin contact plays an important role in establishing a solid paternal bond.

What are the benefits of having a good paternal bond?

A good paternal bond is just as important as a good maternal bond. A baby should be given a good father figure while he or she is growing up. The values that a child will pick up from the father may be different from those of the mother. All are equally important, of course. Though a paternal bond is bit more tricky to fully solidify, you and your partner should resolve to work on it because that is what your child deserves. A good paternal bond:

A father who expends effort to bond with his child is a sign that he values his commitment to the family. Seeing that your partner values paternal bonding will only serve to deepen your relationship because you gain more trust in each other.Paternal bonding is important. There shouldn’t really be much of a problem so long as the father is committed to having a relationship with his child. All in all, creating a strong paternal bond requires time, patience and consistency.

How to Create and Live with an Effective Budget

Do You Think You Spend Enough Quality Time With Your Family