Digital Time and Your Children 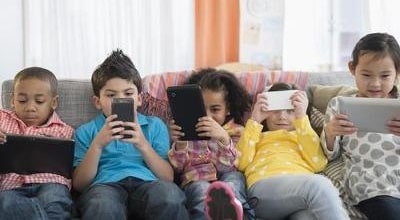 Digital Time and Your Children

The topic of digital time when it comes to children is something of a Marmite subject; people tend to either love it or hate it. We understand the concerns from both camps and yet when you look at the pros and cons of children spending time on computers and tablets and apply some ground rules, digital time can offer huge benefits. Screen time limits for your kids

Many parents reading will have spent their leisure time climbing up trees, rolling down hills, getting nettle stings, bumps and bruises and of course will have fabulous memories of those times. The addition of digital time in our own children’s lives does not necessarily mean that they too can’t enjoy the same experiences. Here at ParentsNeed we very much believe that everything in moderation can be a great outlook to have, ensuring that children receive the benefits of digital fun as well as outdoor activity.

Learning through play is an ethos which forms the backbone of early years teaching, from nursery school through to the first “proper” years in school and beyond. The idea is that while playing and having fun children inadvertently develop and then practice a number of skills that they will continue to use and develop further as they grow. Roleplaying games such as using wooden food and a play kitchen could be used to teach little ones about food hygiene, how to play nicely with others, sharing, using their imagination and more.

In the same way that half an hour on a tablet on an appropriate app could help youngsters with their phonics and reading or older children maths and problem solving skills, all while playing.

If you’ve ever uttered the words “when we were kids we didn’t have our face in devices, we were out in the fresh air” you might (understandably) be someone who is worried about the digital world taking over your children’s leisure time. We get it, trust us, however the very best way to ensure that your children get the best of both worlds and that digital time doesn’t overtake any other time is to put rules and restrictions into place. 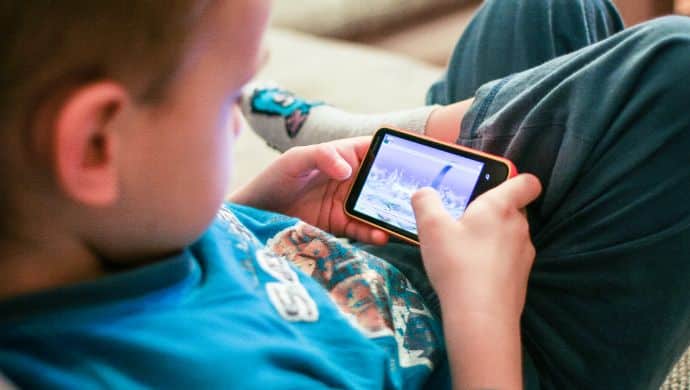 Digital time is great, promotes learning, is fun, keeps children incredibly quiet (we’ve all thought it!) and yet it isn’t something you want them playing 24/7. Have a look at your children’s ages, their interests, other activities they have on and find a happy-medium of time allowances that may be put towards digital time. For example, you might say an hour a day is fine (with breaks) or 2 x 30minute sessions. Your family dynamic might support weekend digital fun but nothing during the week. Whatever you choose, make sure that you stick to that routine (unless they have earned extra time or lost it for whatever reason). By taking control of when digital time occurs you can easily ensure the balance between this type of play and “proper” play.​

A large portion of digital time related worry is dedicated to the effect all of this screen time can have on our children’s health. This is a valid concern, however if managed properly there is no reason why digital fun can’t be as healthy as any other form of play.

Obviously spending hours on end staring into a screen is not ideal and over time may well cause or contribute to the deterioration of a child’s eyesight. That said, children won’t be spending hours and hours every day on their devices. The general rule of thumb for taking breakings from screen time is that children should every twenty minutes move their eyes away from the screen to stare at a far-off point for at least ten seconds. This combats the type of eye fatigue that is common in many adults when they spend a lot of time doing screen work.

It is also wide for children to get up, take a break, stretch and walk around briefly (a good time to hydrate) every twenty to thirty minutes.​

If you working in an office the IT or health and safety officer will have a tonne of leaflets on how to set up and maintain an ergonomic desk area. This set up minimises the risk of eye strain, back pain / damage and posture problems cause by sitting and working. These principals need to be taking into account when it comes to a child’s digital time. 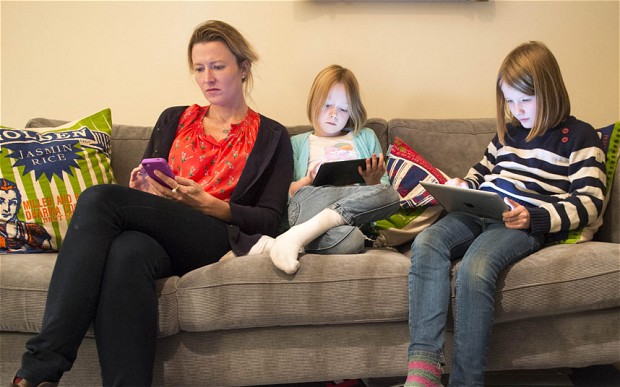 Schools are keen advocates of digital time, with the UK being the first to introduce computer related subjects into their national curriculum for all five to sixteen year olds. Not only will children learn basic typing skills, how to save, sort and retrieve information (like many of us parents were taught); children these days are enjoying the opportunity to learn to do all of this and more, including learning the fundamentals of coding.

If you want to know more about coding and what children around the world are working on (and the benefits of doing so) look up Code Club for your local area. There are over 6000 Code Clubs worldwide with more joining every week. These clubs are run by volunteers who are fully trained and it is a great way for children to unleash their creativity via programming and of course practice the coding skills they are learning at school.

There are a number of ways that children can practice these school and Code Club skills at home as part of their screen time, after all, Steve Jobs said “Everyone should learn how to program a computer, because it teaches you how to think.”​

There are thousands of games and apps available for children however we’ve picked these two out to use as an example of how digital time for kids can be a great idea.

There’s a good chance that if you have children (or live on Earth) that you’ll have heard about the latest phenomenon in gaming and augmented reality, Pokemon Go. This particular game offers a perfect example of how children are able to spend their digital time in a positive manner. The basic principal of the game is to do much like Pokemon trainers did back in the early 90’s, use Pokeballs to catch different Pokemon characters.

This new (free) app enables everyone around the world to use their GPS to walk around their local area and find a range of different Pokemon to catch, train, evolve and fight against other Pokemon. Why is this such a great game? The name is in the title… GO! Nicki, a member of the ParentsNeed team tells us about her experience of Pokemon Go.

“We have been playing this game since the beginning with our two sons, 5yrs and 10yrs old. In the first three days (combined) we walked 20km more than we would on an average day. We’ve explored areas of the town that we wouldn’t normally visit and have thoroughly enjoyed the challenges so far. My two have always been keen walkers however boys don’t always want to leave their Lego and go out. Mention a “PokeWalk” instead and their trainers are on and they’re by the door waiting in five seconds flat.​

For us Pokemon Go is the perfect example of how digital gaming can be used to encourage younger children (and older ones) to walk, climb and explore more”.

Yes, there have been alarming news stories about teens waking into oncoming traffic following the app however we feel that is less about the game / app itself than it is about common sense! The same applies to people who drive into lakes or brick walls because their Sat Nav told them too. With due care and attention Pokemon Go can be a great way to merge physical activity with digital fun.

Another incredibly popular game, Minecraft is available on tablets, PC and laptops and popular gaming consoles such as Playstations and Xbox. The idea behind the original game is to find and use a vast range of materials to build things. That is the simplest explanation however Minecraft offers so much more! Popular with children and adults of all ages Minecraft offers players the opportunity to develop problem solving skills, use math skills, build, and enjoy a range of fun challenges and learning opportunities.

Minecraft has been used by teachers of primary school children, college tutors and even by university professors to help teach and to allow children and young adults to grow. Indeed, it has been such a success that Mojang have even released a version specifically for schools to use as a tool.

If you ask children about Minecraft you’ll 1) be bombarded with information on building online circuit boards, finding Redstone and coding and 2) you’ll hear the word “awesome” and possibly “epic” a fair bit. If you are one of those parents who have already seen their children achieve brilliant things via the game, you’ll no doubt offer similar praise.​ 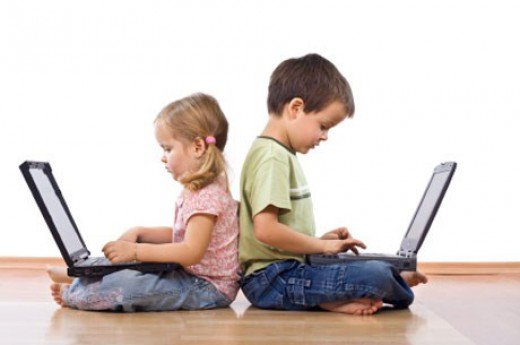 A major concern for many parents is internet safety and you would be wise to be wary. There are a number of issues that arise from young children and teens having access to the online world that us as parents certainly didn’t have to deal with when we were children.

Not only might children stumble across unsavoury or age inappropriate content there’s the issue of cyberbullying and the more sinister aspects of children being online; online predators.​

While these are real issues there is a lot that you as a parent can do to reduce or even eliminate the risk to your children. Firstly, research appropriate parental controls and filters for all of the devices in the house that your children will have access to. The majority of sites have additional filters making them suitable for child-use (YouTube for example). It is also important to monitor what your children are doing online. Younger children especially should have an adult with them at all times.

Thankfully schools are very keen and pro-active when it comes to making students aware of the issues surrounding internet safety and this is something can continue with at home too.​

The internet can be a dark and scary world, especially if you don’t understand it very well. Thankfully there are a huge number of resources and support organisations in place to help parents and children stay ahead of the game.

Digital time can be hugely rewarding, educational, fun and in some cases even encourage children to be more active. When weighing up the good versus evil debate that goes hand in hand with deciding whether children should be allowed digital time at home read through this guide carefully and make a balanced decision.

While we’d love our kids to be outside playing, coming in when the streetlights come on we live in a different world nowadays. This, coupled with the eruption of the digital revolution means that our children’s childhoods are bound to look different to ours however different doesn’t necessarily mean worse and here at ParentsNeed we give digital time (monitored and used effectively) a big thumbs up.​

How to Disinfect Toys Properly

Should a Mom Go Back to Work or Not After Having a Baby?

When Should Your Child Stop Using a Stroller?