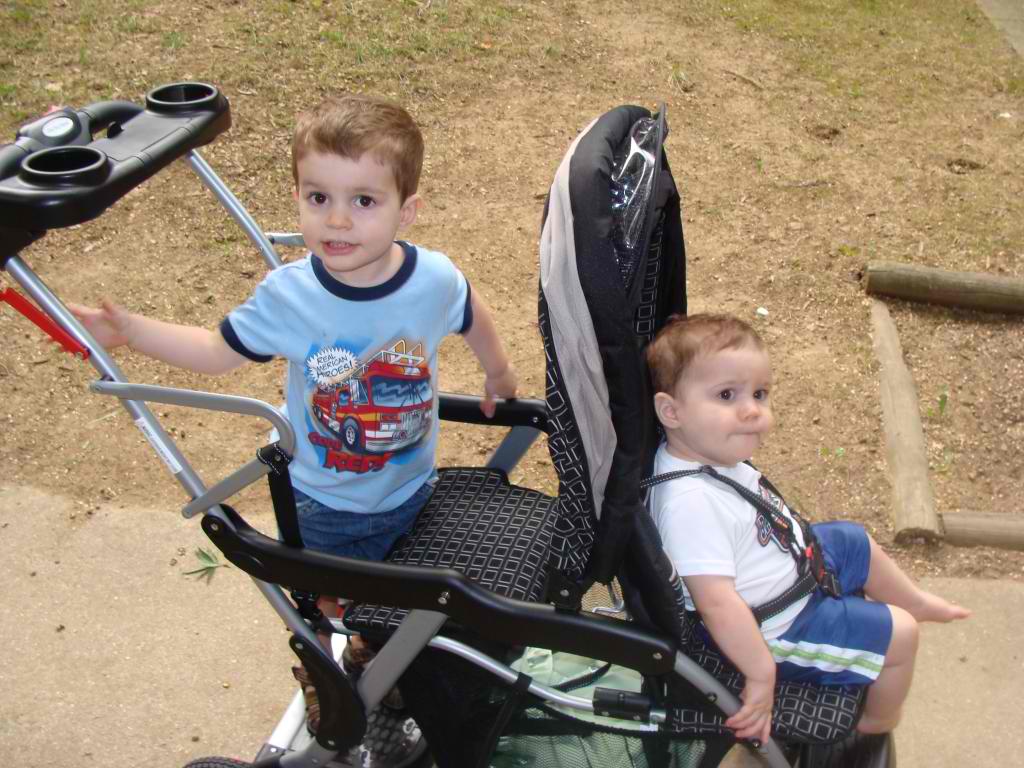 It can be frustrating to see an innovative product on the market, because as often as not your first thought isn’t “I could use one of those!” – it’s “Why didn’t I think of that?” Sit and stand strollers are a perfect example.

For the uninitiated, sit and stand strollers are designed for the majority of young families, which have two children only separated in age by a few years. Note: We’re rounding down from the famous “2.3 children per family” number you often see quoted.

It isn’t always enjoyable to take an infant for a spin around the block or to the park when you’re also dragging a toddler around with you; sit n stand strollers are designed to take care of that issue. They are tandem units that have a traditional infant seat in the front, and a platform/bench seat behind it on which the older child can either stand or sit if he gets tired of walking. Some will accept major models of car seats, while most have lots of storage space (definitely helpful if you’re taking a trip anywhere with two kids).

Sit and stand strollers are normally lightweight (compared to traditional double strollers), narrow and not built for jogging or rides off of the pavement. And they’re not always comfortable for toddlers who want to stretch out and get comfortable for a long ride.

But they can be a lifesaver for most walks around the neighborhood or afternoons at a bustling mall. That is, as long as you don’t spend your time thinking about how much money you could have made if you were the first to manufacture and sell them.

Before going through our best sit and stand stroller reviews, you may also want to check out first our comprehensive Sit and Stand Stroller Buying Guide.​

Here’s a look at the top 5 best sit and stand strollers on the market. 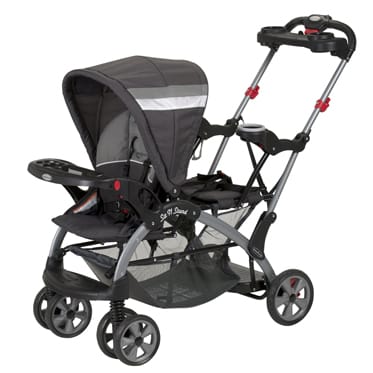 So who did invent the Sit and Stand? It was Baby Trend, and they continue to make outstanding versions of the stoller. The Ultra is just about as good as it gets, and they don’t cost a fortune.

This model will last you through most of your older child’s toddler years, because the stroller has a total weight limit of 100 pounds, optimally divided between 50 pounds in the front and 50 in the rear, but no one will penalize you if you cheat a bit and use it when your toddler reaches 55 or 60 pounds.

The flexibility of the Sit N Stand Ultra makes this stroller more versatile than most. You can use it “as designed” with the baby sitting in the front seat and a toddler behind her. But you also have the option of attaching an infant car seat above the front seat with the toddler in back, or attaching a car seat directly to the back of the stroller facing mom (so mom can watch baby and interact with her) with a smaller toddler sitting in the forward seat.

That last configuration is great for moms with an infant and another younger child. If you’re walking two infants, you can also use two car seats at once, one in front and one in back. Among the car seats that will work with the Baby Trend (in addition to their own seats) are ones made by Graco, Britax, Safety 1st and Evenflo.

As with all of these sit and stand strollers, the “back seat” (which is actually a padded and removable bench) isn’t enormous, so your five or six year old may get pretty antsy sitting in it for a long period of time. Of course, a child that old may be close to “aging out” of this unit because of her weight.

The Baby Trend stroller is longer than most of its competitors and it has relatively small wheels, so it doesn’t maneuver exceptionally well, particularly with the weight of two children in it. Since it’s not intended for challenging terrain, though, that’s not much of an issue. Safety is no problem with this model, with a five-point safety harness for the front seat and three-point safety straps for the back seat, and a foot-activated brake for the stroller which works well.

The front seat does recline, but not all the way back – and when it’s reclined, that leaves less space for a toddler to stand. The Sit N Stand folds easily and will fit into most trunks without an issue. It weighs just over 26 pounds which might seem heavy, but it’s around the same weight as most competitive sit and stand strollers.

There are two cup holders positioned just in front of the handles, and another holder for a sippy cup in the baby tray (which also is where the car seat attaches), along with a large removable canopy and a very big storage compartment. There’s very little that Baby Trend hasn’t thought of, and getting all of these features at less than $150 is nothing short of amazing. 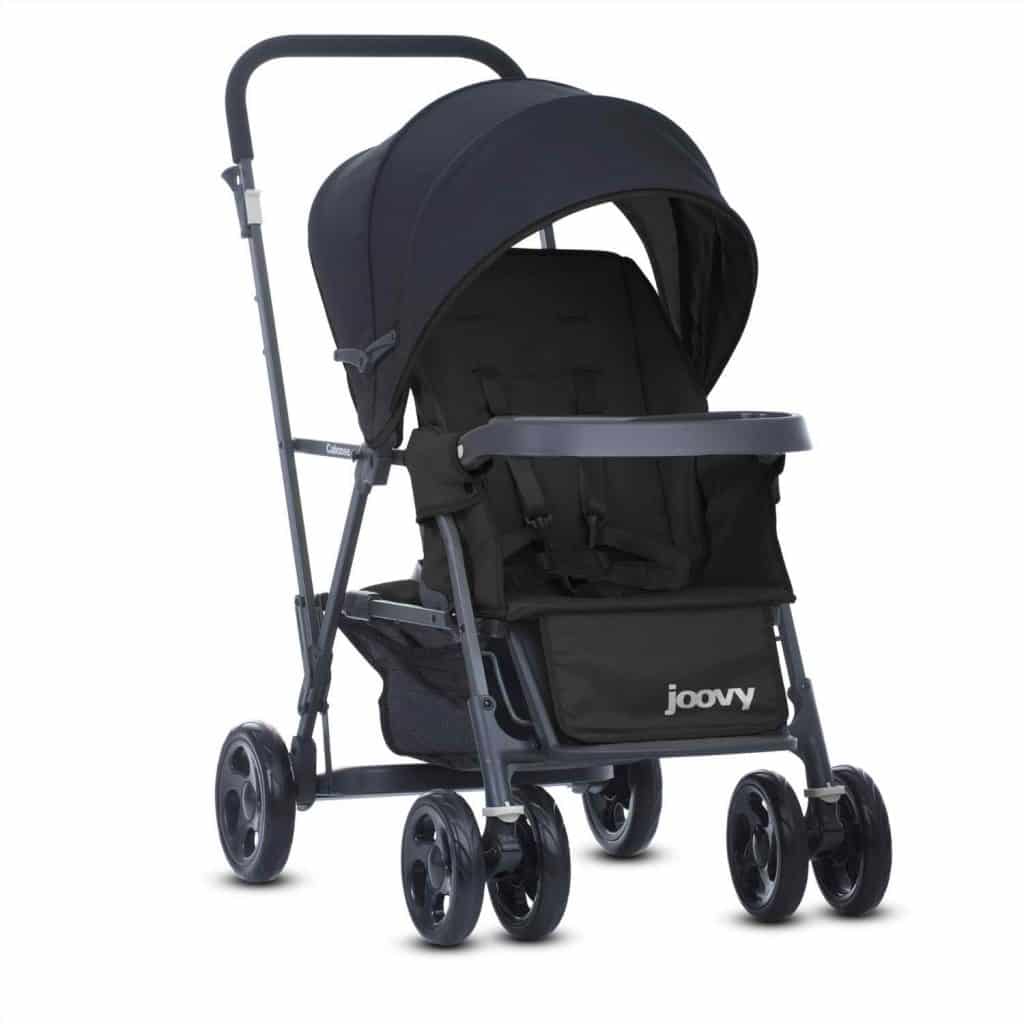 There are two Joovy Caboose models we’ll be looking at on this list of the top 5 best sit and stand strollers; this is one of the company’s lower-level models, and it’s comparable to the Sit N Stand Ultra in many ways.

A big plus for the Joovy stroller though, is that it’s about six inches shorter than the Baby Trend model so it’s easier to wheel around with two kids sitting inside. It also provides a smoother ride thanks to its four-wheel suspension. The disadvantage of the Caboose is that it’s not as flexible as the Sit N Stand when it comes to seating and positioning arrangements.

The basic setup of this stroller is the standard one; there’s a front-facing seat for baby, and a rear standing area and bench in the back for a toddler. The Joovy stroller comes with a universal car seat adapter so you can attach most models of car seat on top of the front infant seat, but unlike the Baby Trend, you can’t attach a car seat to the back of this stroller.

There’s a nice option that’s unique to Joovy strollers though: a front-facing reclining rear seat which you can purchase and put right into the standing stroller area. That second seat is perfect for parents who have a second young child but don’t want to lay out money for a “real” double or tandem stroller.

The weight capacity of the Caboose is about the same as the Baby Trend, 45 pounds in each seat, and the seats are narrower than on a single stroller – so don’t count on using this model forever because your toddler will eventually outgrow it.

The front seat does also cut off some room in the back when you use the recline feature. But it’s comfortable enough, particularly when the toddler wants to stand a lot of the time as they usually do. The canopy is large enough to cover both seats nicely.

One drawback for some will be that this stroller doesn’t have a parent cup holder/organizer tray (just a nylon attachment) although it does have one for baby, which doesn’t seem fair to mom. A bigger drawback may be that the storage area isn’t as large as it could be.

Those reasons, along with the lesser flexibility, is why we rank the Joovy lower than the Baby Trend. You may feel that the greater ease of maneuverability, however, makes this stroller a better choice. Since they are both in the same price range, we think most moms would be happy with either one. 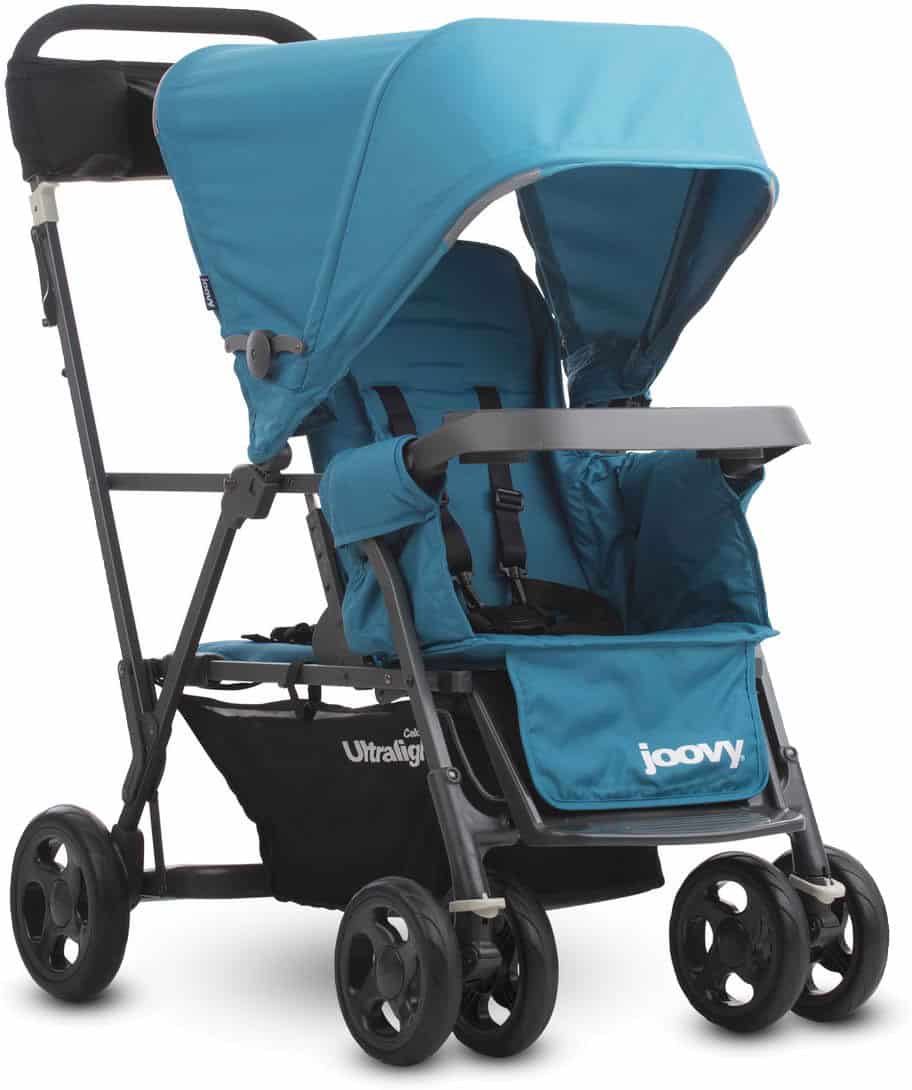 The normal protocol for top 5 lists is to just include the “best” model from each manufacturer. The Joovy Ultralight, though, has extra benefits and is in a significantly higher price range (about $75 more than the regular Caboose), so we’re giving it its own entry.

Usually when you have to pay more, you get more. The advantage of the Ultralight is that you get less – and you’ve probably guessed from this stroller’s name is that what you get less of, is weight. At 22 pounds, this is the lightest sit and stand stroller on our list (and it weighs less than many single-child models) thanks to its aircraft-grade aluminum frame.

But it has most of the same benefits as the standard Caboose model reviewed above: a generous weight limit of 90 pounds, four-wheel suspension, a universal car seat adapter, and the optional front-facing rear seat. It’s even easier to maneuver, too, thanks to sealed ball-bearing wheels and the overall lightness of the stroller.

Some may think the weight of the Ultralight makes it feel a little too light, and it’s definitely not suitable for off-road trips despite its maneuverability. It definitely fits the need for many parents who want the lightest sit and stand available they can find, though, and it’s a well-built and fun stroller to wheel around the neighborhood.

(We should also mention one other stroller in the Joovy family, the VaryLight; it’s actually heavier than the other models we’ve looked at, but it’s flexible in several other ways since you can adjust the length of the frame to make it either roomier or compact, and there are 13 different adjustable seating positions including double car seat. The weight limit is higher at 55/55 and it has larger wheels more suitable for rougher terrain, too. You’ll pay an extra $75 over the cost of the Ultralight for those features.) 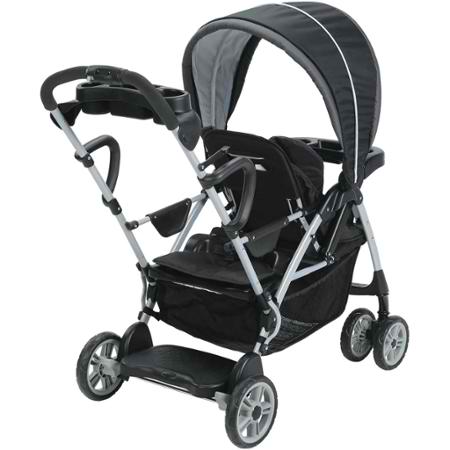 Graco has recently introduced their “Click Connect” line of strollers, and they’re a definite improvement over the “Classic Connect” strollers which were quite popular for a long time.

If you didn’t know better, you’d swear that the Roomfor2 was made by Baby Trend using the same blueprint. Almost all of the features are identical, as are the prices of the two strollers. The big differences are that you can’t connect a rear-facing baby seat to the back of the stroller and the canopy and storage area also aren’t quite as large.

Other than what was mentioned above, there’s not much to choose between the two; they’re both very good sit and stand models. We’d be inclined to choose the Graco stroller if we already had a Graco car seat, but would otherwise opt for the Baby Trend.

(For an extra price, you can upgrade to the Graco Ready2Grow Click Connect which is larger and features separate canopies for each seat.) 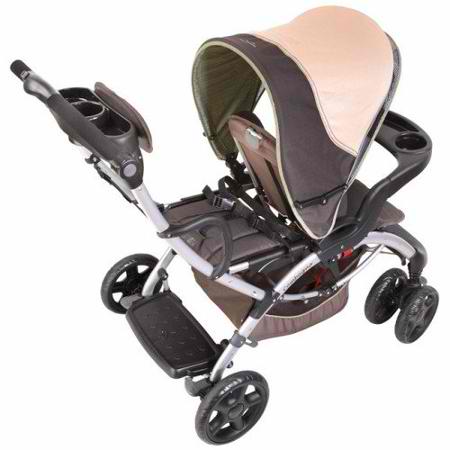 We like this sit and stand stroller a lot. It comes in at #5, though, because we aren’t sure that there are enough “extras” to justify paying an extra $70 more than for the Baby Trend, Joovy or Graco.

There are all of the features you should expect from a model in this price range: all-wheel suspension, good maneuverability, a universal car seat adapter, good padding on the seats (plus a padded back rest for a toddler standing in the back), one-touch brakes, parent tray and easy folding for travel.

There’s also a five-point harness in the back, rather than the more-standard three-point version, plus adjustable handlebars which are not standard on most competitors.

The Mia Moda is the heaviest of all of these sit and stand strollers at 34 pounds, making it a bit sturdier on all types of ground but a little more difficult to lift in and out of a car. The major negative is that the canopy only covers the baby in the front seat; you’ll need extra sun protection for your toddler riding in the back.

FAQ (By Our Ardent Readers)