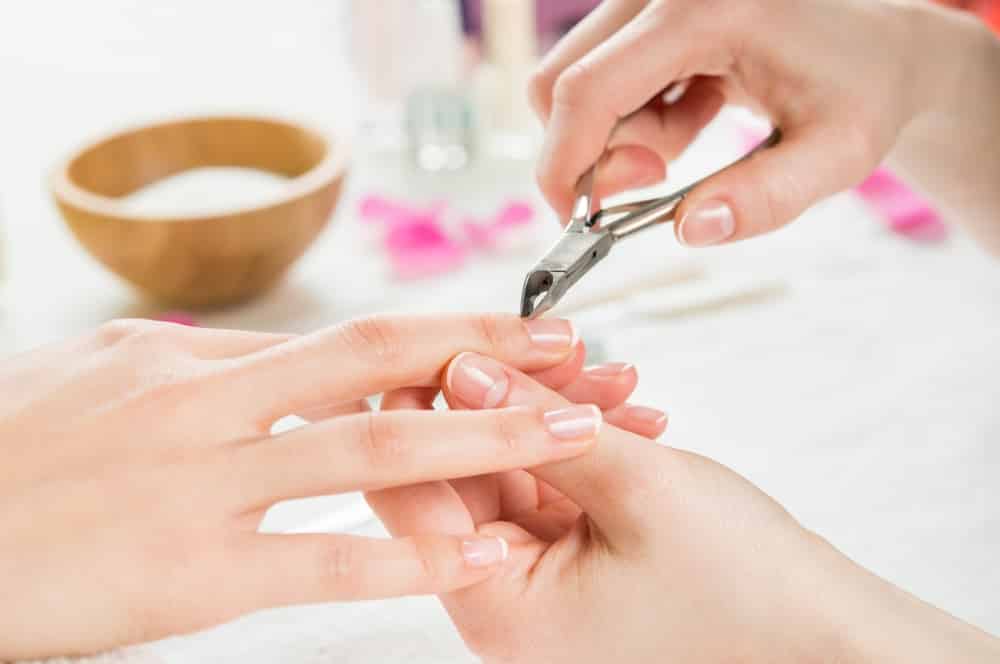 If you're wondering about what cuticles are and why we need to remove them, you'll want to visit our Best Cuticle Remover Buying Guide.

​Your cuticles are those tiny little strips of skin that grow just beyond your nail bed on every finger. But don't let their size fool you as to their importance! These little guys act as a barrier to entry for bacteria that you are constantly exposed to because of all the things we touch with our hands. So we need to take care of these important little guys. Why is nail cuticle care so important?

If you are a mom, your hands probably work hard all day long. It's probably not a bad idea to treat yourself to a manicure once in a while. Keeping your hands, nails and cuticles in good shape will ensure that you stay healthy, so you're there for your family.

When you go for a manicure, the manicurist takes care of pushing back or trimming cuticles and removing any rough or damaged skin; so people who have frequent manis and pedis never have to worry about cuticle removers.

Like nails, your cuticles also get long. However unlike nails, when cuticles get long they should never be cut. While it’s tempting to simply cut them, dermatologists warn against doing so. Cutting your cuticles can create an even larger  opening for bacteria to enter your nail bed and cause an infection. An infection can be painful and can also result in unsightly white lines or spots to develop in your nails. The right approach is to gently push them back with a cuticle stick or soft cuticle pusher once they’ve grown past the nail bed, and using a gel, cream or liquid cuticle remover product to remove the dead excess skin.

After removing your cuticles using cuticle removers, you can apply cuticle oil to deeply moisturize your cuticles. Doing so will ensure that your nails and cuticle keep that "manicured look" for a few days after your treatment.

Cuticle oil is also available as a pen for easy applications. Keeping your cuticles moisturized will protect your cuticles from damage and maintain that healthy appearance.

If your cuticles are left to grow without proper care, they will cause a build up of excess dead skin cells and may result in cracked skin at the cuticles. Bacteria feed on dead skin cells and the cracked cuticles is a giant welcome mat for bacteria to enter your nail bed.

Here’s our look at the top 5 best cuticle removers.

Sally Hansen (and her husband, who was a chemist) founded her brand of quality yet affordable nail care products well over half-a-century ago, and it remains the best selling cuticle remover brand in America and the uk. Instant Cuticle Remover wasn’t her first product (that was the Hard As Nails protection formula, still very much around today) but it has become one of the line’s most successful offerings.

One of the selling points of Sally Hansen products is that they’re “salon quality.” Personally, I think it'd be hard to find a cuticle remover gel that can do a better job. Instant Cuticle Remover is a gel that is easily applied to the cuticles; after 15 seconds, you push the cuticles back with a pusher or manicure stick, and then wash with soap and water. All of the dry, flaky and dead skin that’s grown or accumulated at the base of the nails will be broken down and dissolved. That’s all it takes, and you’re done until the next application. Once every week is the recommended time frame, and the company says not to use this cuticle remover gel more than twice a week.

The Sally Hansen Instant Cuticle Remover really works, and works well. It completely eliminates the need (or temptation) to trim. The gel can also effectively be used on calluses (which require a 60 second application), or under the tips of nails to remove the dead skin that often builds up in that area. The only potential problem comes with leaving the gel on the skin too long. If this gel isn’t removed quickly it can cause a burning sensation and start dissolving skin around the base of the nail. It’s also not the best product to use if you have lots of cuts around your nails.

Not being scientists, we can’t tell you with certainty which of the Instant Cuticle Remover’s ingredients is primarily responsible for its efficacy, but we’d guess that it’s the potassium hydroxide. There is also green tea, aloe and chamomile in the formulation; those natural substances are often used in the skin conditioners and softeners you should be using on your hands regularly, so it would make sense that they would do a great job softening and conditioning cuticles as well. If you’re looking for an organic cuticle remover or a completely natural product, you should know that the Sally Hansen remover does contain ethanol, parabens and a number of other synthetic ingredients. That’s probably to be expected; we wouldn’t think that just putting aloe or green tea on cuticles would dissolve them so quickly.

This product works extremely well, a bottle only costs a little over five bucks, and it will be months before you need a new one. You can’t ask for more than that.

The Deborah Lippmann liquid cuticle remover is more of a cuticle softener liquid that works to exfoliate your nail cuticles rather than a cuticle dissolving liquid which dissolves dead cuticle skin as the Sally Hansen Cuticle Remover does.

As a cuticle exfoliator, the Deborah Lippmann cuticle remover is aprofessional salon quality product that is simply enough to use for a DIY cuticle treatment.

​How you use this cuticle remover is by using the included eyedropper and applying 1 drop to each of your nail cuticles. By the time you're done your last cuticle, the dead skin on your first nail cuticle will be softened enough that you can use your cuticle stick or cuticle pusher to gently push back the softened dead skin to reveal your cuticle. By the time you're done pushing back on your first cuticle, your second nail cuticle should be ready for pushing and so on.

At $18 for 0.5 fl. oz, the Deborah Lippmann Cuticle Remover is on the expensive side. What you're paying for in this cuticle remover is the natural Red Seaweed ingredient. This natural active ingredient is very concentrated and you only need a drop per nail cuticle for it work and so a bottle will last you months! 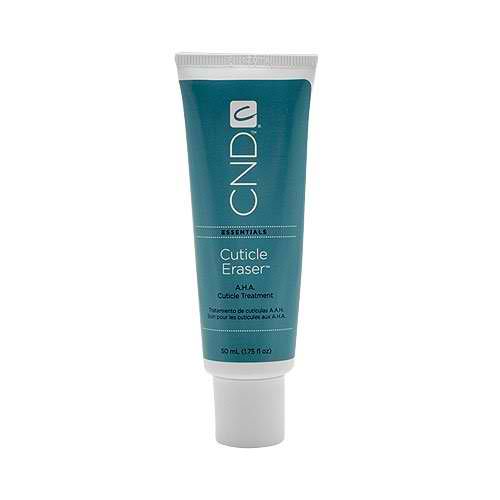 This is another exfoliation product which not only is sold for salon use, but according to the manufacturer’s disclaimer is not intended for home use. That doesn’t stop you from purchasing it and using it, though, and you could do a lot worse. The CND Essentials comes in cream form and works in much the same way as the deborah lippman Cuticle Remover, exfoliating rather than instantly dissolving dead or flaking cuticle skin.

The active ingredient in the CND Cuticle Eraser is a blend of alpha-hydroxy acids, which exfoliates dead skin cells and moisturizes the cuticles. That means it won’t do the magic act of dissolving cuticles in seconds, but is great for long-term care and maintenance as well as making cuticles much easier to push back with a stick. You’ll find that you need to use this product more often than the deborah lippman, but it’s much less expensive ($13 for 1.75 ounces) so that will balance out in the long run.

This is not an organic, all-natural cuticle cream. While it has several handfuls of organic ingredients including kiwi, chamomile, cucumber and aloe, it also contains parabens, alcohol and artificial fragrances (the cream has a distinct fruit aroma). With that many non-natural ingredients, we would have expected the CND Essentials to dissolve cuticles like Kool-Aid in water, but it’s still a very nice product for exfoliation and moisturizing. 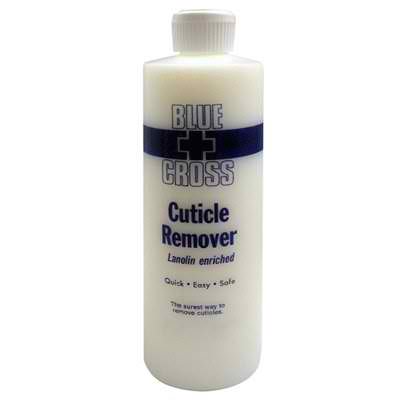 There are definitely pros and cons to the Blue Cross Cuticle Remover, which is used in many lower-end nail salons because of its inexpensive price. The pros are all things you’d want to see when considering purchasing a product: it works well for its intended purpose, it’s cheap, and it can stay on your cuticles for longer than 15 seconds (in fact, it needs to stay longer in order to work properly). The cons are that this liquid cuticle remover is extremely runny and difficult to work with, unless you put it into a bowl and apply it from there – and that it’s not going to dissolve your cuticles in a flash.

The Blue Cross is unlike the two products we’ve looked at earlier, it's more of an exfoliant and conditioner than a harsh solution to quickly vaporize dead or damaged cuticle skin. In fact, it has just about all of the same ingredients as the deborah lippman remover. However, it does contain potassium hydroxide, so it will act faster than the CND remover while not being as caustic as the Sally Hansen product. That puts it right in the middle of all of the products we’ve examined on this list of the top 5 best cuticle removers – not quite as easy to use as CND, not as fast as Sally Hansen, and cheaper than deborah lippman.

That may be just what you’re looking for. It does a good job of softening the cuticle so it can be pushed back easily and dead skin can be removed without effort, and it’s inexpensive; its list price is less than $6 for six ounces, but it can often be found in larger sizes at an even lower cost. 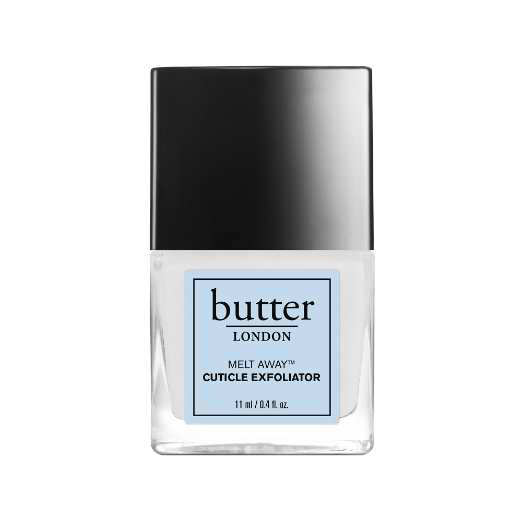 Butter London produces high-end nail products, at high-end prices. Their Cuticle Eliminator cream works much like the last four products we’ve reviewed, conditioning and exfoliating cuticles to make them easier to push and manage while getting rid of dead or damaged skin, albeit somewhat slowly (you’re supposed to leave it on for 3-5 minutes and warned to remove it before eight minutes have passed).

The Melt Away Cuticle Eliminator is somewhat of a chameleon; those with “problem” skin will tell you that it’s harsh, those without breaks, cuts or other skin issues will swear that it’s gentle. We had no problem with it, but be aware there may be better options if you’re a nail biter or work with your hands a lot. Butter London uses no formaldehyde, toluene or parabens, although the product is definitely not completely organic, either. The active ingredient that works to remove dry skin, as with most of our other reviewed products, is potassium hydroxide.

This product will certainly do the job of softening and cleaning up your cuticles, but you may not be willing to pay the price it takes to give it a try. A 0.6 ounce bottle will cost you almost $20, which is almost more than you’d pay for the deborah lippman product and substantially more expensive than Blue Cross or CND. We like the Butter London – just not enough to pay this price regularly for it.

What Should You Do When Your Kid Talks Back?